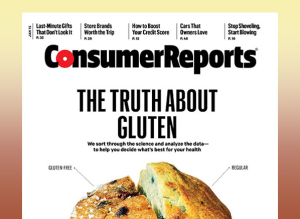 The other day I received an unsolicited copy of the January 2015 issue of the magazine, Consumer Reports.  I was surprised to find a pretty good article about dietary gluten.  The main thrust of the article was to present the scientific evidence to support so-called gluten sensitivity, a “condition” which has reached epidemic proportions in the U.S..  So, Is it the real deal or hype?

Let’s Back Up a Bit

Gluten is a protein found in wheat, barley, and rye.  Because of its useful properties as a binder, it is found as an additive in many foods that are not grains.  Examples include sauces (including “regular” soy sauce), salad dressings, soup mixes, candy, ice cream, and cold cuts (a complete list of foods that contain gluten can be found at www.celiac.com).  This would not be a problem except that some people cannot tolerate gluten in their diets and develop gastrointestinal symptoms when even minute quantities of gluten are consumed.  The “classic” medical disorder associated with gluten sensitivity is celiac  disease, an autoimmune disease that affects about 1% of the population world-wide.  Many cases of celiac disease go undiagnosed with potentially serious health consequences.  In almost all cases of celiac disease, elimination of  gluten from the diet works wonders.  People with celiac disease are at increased risk for the development of other autoimmune diseases particularly type 1 diabetes mellitus, chronic lymphocytic thyroitidis, and pernicious anemia.  Celiac disease is usually easy to diagnose by a simple blood test.  Of course, if the condition isn’t  suspected, the proper testing won’t get carried out.

The Consumer Reports article touches on celiac disease, but its main emphasis is on non-celiac gluten intolerance or sensitivity, which is commonly called non-celiac gluten sensitivity or NCGS.   Particularly in the U.S., many people believe they have NCGS and have gone “gluten-free.”  This has led to an explosion of new gluten-free foods.  These days, almost all supermarkets, up-scale or not, have not only organic food sections, but also gluten-free food sections.

Is NCGS a Medical Condition?

Given the large number of people who swear they cannot eat gluten without getting sick, there are surprisingly few good studies in the medical literature  to support the notion that NCGS is a disease.  On the other hand, I am not aware of any good data to show that going gluten-free is unhealthy- it is still possible to eat well without ingesting gluten, as many people with celiac disease have proven.  I often encounter people who tell me they have NCGS and do not eat gluten, but see them (?unknowingly) eat many different foods that I know contain plenty of gluten and do not develop any typical celiac disease symptoms.

So, What Should We Do About NCGS?

I have learned not to get into discussions with people who tell me they have gone gluten-free and feel much better, other than to ask them if they have been tested for celiac disease.  In my opinion, if people have persistent gastrointestional symptoms, it is important to rule in or rule out celiac disease as well as other types of gastrointestinal disorders such as inflammatory bowel disease (e.g., Crohn’s disease and ulcerative colitis).  Then, if people believe they feel better avoiding gluten, that’s fine.  But they should expect to pay quite a premium for foods with the gluten-free label.  No matter what, the NCGS epidemic has been fantastic for people with celiac disease; they now have a much wider choice of gluten-free products than would have been possible before the NCGS epidemic.  Finally, people with celiac disease may not show much in the way of gastrointestinal symptoms. This particularly true in children who may show only poor growth (height and/or weight) or fatigue.  Certainly, in any child found to be anemic, celiac disease (and other systemic disorders) need to be considered.  One very important thing I almost forget to mention- when people are tested for celiac disease they must NOT be on a gluten-free diet; the antibody tests that are used to diagnosed celiac disease are usually normal in that situation, whether the person has celiac disease, NCGS, or whatever.

If this subject is of interest to you, there was also a very nice article published in the NYT a couple of months ago (October 6. 2014), entitled “When gluten sensitivity isn’t celiac disease,” written by Jane Brody.