In my last entry (April 12, 2015), I discussed how to diagnose diabetes and prediabetes.  But, I never did discuss what it means to have prediabetes and what should be done about it.

I will start with a simple case history: A good friend called me last week and told me that his doctor had diagnosed him with prediabetes and recommended a low carbohydrate diet.  My friend wanted to know what I thought about that.  He is 84 years old, but quite healthy and active.  The only medications he takes regularly are a baby aspirin and a multivitamin.  There is no family history of diabetes.  At a recent routine check-up last month, his physical examination was normal, including his blood pressure and weight (BMI 23).  Laboratory studies showed normal LDL-cholesterol, HDL-cholesterol, and triglycerides (88 mg/dl, 50 mg/dl. and 80 mg/dl, respectively).  His fasting plasma glucose was 100 mg/dl (normal range 70-99 mg/dl) and his HbA1c was 5.9% (normal range 4.3%-5.7%).

Classification of diabetes types as well as methods and criteria for diagnosis of of diabetes have undergone major changes over the past 40 years.  In 1997, the Expert Committee on Diagnosis and Classification of Diabetes Mellitus recognized a group of individuals whose glucose levels did not meet the criteria for diabetes, but were higher than normal.  Prior to that, a category called “impaired glucose tolerance,” was already recognized, and defined as individuals whose plasma glucose levels 2 hours after an oral glucose tolerance test were between 140-199 mg/dl.  These individuals were thought to have increased risk for for the development of diabetes.  The term “prediabetes” was also thrown about, and defined as individuals with normal plasma glucose levels, but whose genetic makeup was such that they were destined to develop diabetes.  Anyway, in 1997 the new definition of prediabetes became individuals whose fasting plasma glucose levels were between 100-125 mg/dl and/or their plasma glucose levels were between 140-199 mg/dl, 2 hours after an oral glucose tolerance test.  It was not until 2010 that HbA1c between 5.7- 6.4% was added to the definition of prediabetes.  Studies had shown that individuals with HbA1c in that range had a high likelihood (25-50%) of developing diabetes within the next 5 years. 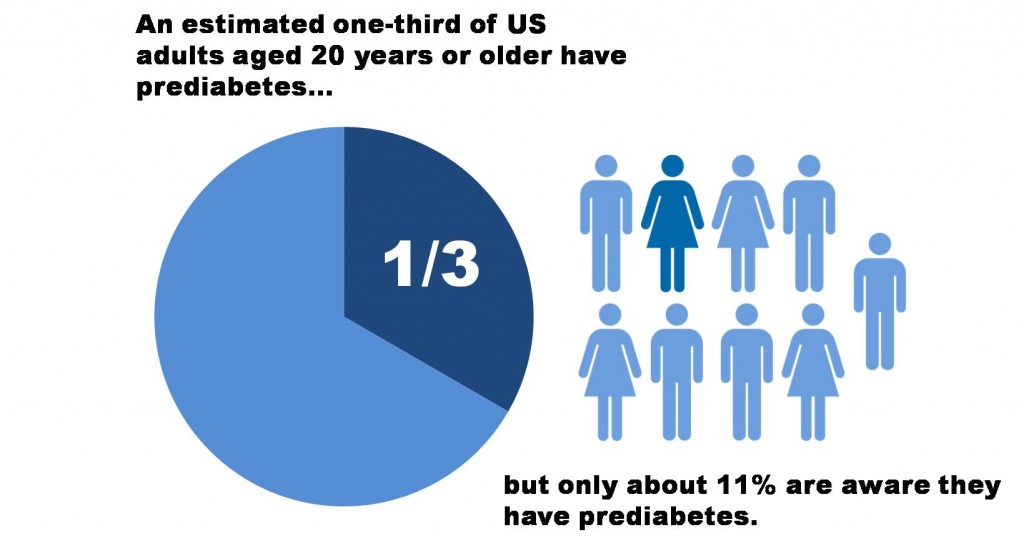 Back to the Case History

So, based on the laboratory studies, my friend has prediabetes.  Otherwise, he does not appear to have any of the risk factors for diabetes other than his age.  As it turns out, I recommended that my diabetes laboratory, which is the national reference laboratory for HbA1c, remeasure his HbA1c (it was easy to do with a simple fingerstick, and the result was ready in 2 minutes).  This time, his HbA1c was 5.4%, well within the normal range.  I cannot be certain, but I suspect the earlier HbA1c determination (obtained at a different laboratory) was a bit “off.”  So, what should my friend do?  I recommended that he first talk with his doctor, since I am his friend and not his doctor.  But, my worry index that my friend is well down the road to diabetes is very low.  Even if the repeat HbA1c had been 5.9%, in my opinion, simple observation would be the best treatment at this point, with follow-up testing in 6-12 months at the earliest.  My friend does not have any risk factors for diabetes that need to be corrected, such as inactivity or obesity.  I am not aware of any data to show that eating a low carbohydrate diet can prevent the development of diabetes.  The development of type 2 diabetes, the most likely possibility in an 84 year old, is usually a slowly developing disease, and time will tell if he needs to be treated for diabetes.  If subsequent testing shows that he is clearly on the way to a diagnosis of diabetes, there are data to show that use of a medication called metformin (brand name, Glucophage) can stop or slow the progression to diabetes.  But, I would be in no rush to do that just yet.

If this subject is of interest to you, check out the National Diabetes Information Clearinghouse (NDIC).